Automerging is a Renovate feature that you can use to automate upgrading dependencies. When enabled, Renovate tries to merge the proposed update once the tests pass.

Keep in mind that Renovate automerges take a bit of time, do not expect Renovate to automerge a PR the second it opens and passes tests. Wait for at least an hour or two before troubleshooting to ensure that Renovate has had the time to run once in a state where tests have passed and the branch is up-to-date with its base branch. If you or others keep committing to the default branch then Renovate cannot find a suitable gap to automerge into!

Once a branch is automerged, the "Git state" needs to be recalculated for every remaining branch. At times, merging one branch could result in another branch's updates being changed or even removed as unnecessary. Renovate's approach is to ensure that automerging branches are up-to-date with their target branch before automerging. Therefore merging multiple branches in a row won't reliably work, we prefer not to do that. What all this means is that Renovate will only automerge at most one branch/PR per target branch per run, before you need to wait for the next run.

Automerge works particularly well for devDependencies as well as for production dependencies in projects which have great test coverage. 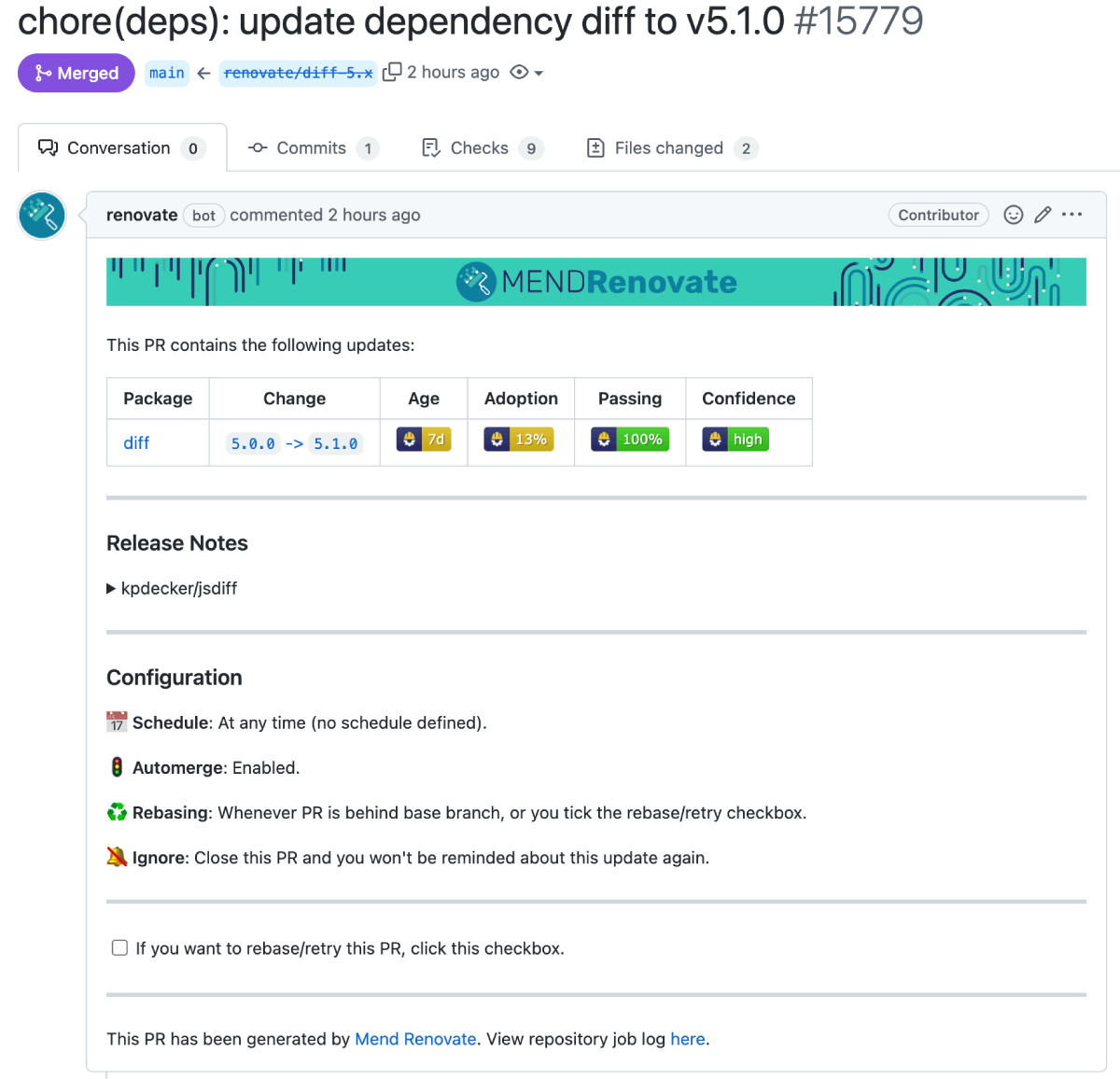 The lowest risk type of update to automerge is probably lockFileMaintenance. When Renovate performs lock file maintenance, it leaves the project dependency definitions unchanged, but refreshes the lock file completely so that the latest versions according to the package file constraints are installed. Here is an example of automerging lock file maintenance:

Automerging lint tool updates can be a real time-saver. Sometimes an update to a lint tool or plugin definition causes tests to fail, and that is usually deliberate/intentional because the lint authors have added a new rule that you need to adhere to. But in many cases the new version(s) will pass tests, and if so then there's really nothing else to consider before merging, so they may as well be automerged:

Non-major updates in SemVer ecosystems shouldn't have breaking changes (if they follow the spec), therefore many users enable automerge for these too:

The matchCurrentVersion setting above is a rule to exclude any dependencies which are pre-1.0.0 because those can make breaking changes at any time according to the SemVer spec.

Automerging is particularly beneficial if you have configured a schedule, because Renovate on its own may be able to automerge the majority of your updates. And this is especially so if your repository needs rebasing, like when you use lock files. Let's say you have dependencies abc and xyz with upgrades, and you use a yarn.lock file.

This is a lot better than you waking up to two PRs and then having to deal with conflicts yourself after you merge the first one.

Even if you automerge PRs, you are likely to still get notification noise - one when the PR is created and another when it is merged. For this reason we recommend you consider setting automergeType=branch which will mean:

Add the renovate/** branch to your testing workflow files, or Renovate will not work properly with the automergeType=branch setting.

The result is that passing updates are essentially "silent" - the only sign of them are the commits Renovate pushes to your base branch. If you have enabled branch protection which prevents Renovate from automerging directly to the base branch, then this won't work and you should stick with the default PR-based automerging instead.

Frequent problems and how to resolve them¶

Sometimes, the reason Renovate is not automerging a PR is because of a configuration mistake. You can confirm that Renovate knows you want it to automerge by checking if the PR body includes the text "Automerge: Enabled". If you see "Automerge: Disabled by config" it means you need to make a config change for automerge to work.

By default, Renovate will not automerge until it sees passing status checks / check runs for the branch. If you have no tests but still want Renovate to automerge, you need to add "ignoreTests": true to your configuration.

We strongly recommend you have tests in any project where you are regularly updating dependencies.

If you have protected your base branch with a list of allowed committers, and Renovate is not on that list, then naturally automerge can't work.

If you have configured your project to require Pull Requests before merging, it means that branch automerging is not possible, even if Renovate has rights to commit to the base branch.

If you have mandatory Pull Request reviews then it means Renovate can't automerge its own PR until such a review has happened.

If you are running the hosted WhiteSource Renovate App on github.com, you can also install the helper apps renovate-approve and renovate-approve-2 and they will mark all automerging Pull Requests by Renovate as approved. These approval helper apps are only available for GitHub.

Depending on the platform, having a CODEOWNERS file could block automerging, because it means a code owner must review the PR.

You might have setup a global configuration in a .github repository, that has a renovate.json file that turns on automerge for certain dependencies. It does not matter where you've put the global config, the important point in this example is that you're extending from a global config that's somewhere else. For this example we'll assume you put your config in a repository on GitHub, called .github.

Repositories in the organization all extend from this global configuration, and so they "inherit" the automerge settings as well.

To turn off automerge for all dependencies of a selected repository, you need to make a config that overrides all packageRules in the repository's renovate.json file, like this: